What’s a Scion of Conquered Earth?

Disclaimer: I received this book for free from the author, however, the views below are completely my own and the free copy had no bearing on my review.

Hi all, just an extra post this week for a book review that I was requested to do on Goodreads, here is the full review below:

The Scion of Conquered Earth is written by Michael J Allen. It follows an unnamed teen trying to survive the wastelands of North America after Earth has been invaded by aliens. At the beginning he is all alone with no memory of who he is or his past.

He struggles to survive and has one very bad day. He is captured by slavers and to make it all worse he is forced to digest the meat of one of his own. He eventually escapes, meets two other escapees; El and Jessie. Jessie sacrifices himself so that the other two can have a chance of survival. One thing leads to another and the tee, now called Alaric ends up in space with a fun AI as his host.

I really liked the characters in Scion of Conquered Earth, once Alaric is no longer alone, Allen makes the characters interesting and life like. Even the AI has a good character and a backstory that I cannot wait to dive into.

The setting, yes it is your typical end of the world but the conflicts it creates are interesting and it always feels like Alaric will die at any minute. Your introduced to other planets the same way Alaric is which isn’t jarring. The character has lost his memory rather than been in Cyro freezing which makes a nice change.

Allen doesn’t clumsily add world building or tech jargon unless it is absolutely necessary for the plot to move on, which is hard to do especially when you want the readers to understand what is going on. Allen does this in a really enjoyable way and you are always guessing what new technology will be next.

It takes a while to get going, and to begin with it can be quite confusing on what is going on especially when Alaric doesn’t have a name. It didn’t feel like the story was going anywhere at the start which can be both a blessing and a bad thing, blessing because well that is how real life works and bad for a novel. Once it does get going however, it pays off in big ways and the book digs its claws into you.

Yesterday I could not put this book down, it has been a long while since I’ve had a book draw me in so much. I keep wanting to find out what happens on the next page and the next. Before you know it its past my bedtime and I have to begrudgingly go to sleep. I would recommend this book to anyone who loves Sci-Fi, and anyone who wants to take the plunge into Space Opera. The rest of the series is already out so I would recommend picking it up as soon as you can. 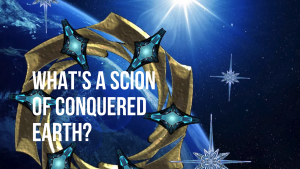 The Scion of Conquered Earth is written by Michael J Allen. It follows an unnamed teen trying to survive the wastelands of North America after Earth has been invaded by aliens. At the beginning he is all alone with no memory of who he is or his past.